You already have a saved search with that name. If you save, you will overwrite the existing saved search. Are you sure?

Michael Hunter
The community of Broome’s Island lies at the mouth of Island Creek on the Patuxent River.  By road, it is at the end of MD Route 264, about 5.8 miles from the intersection of Route 2/4.             Broome’s Island derives its name from the Broome family, whose arrival in Calvert County dates before 1650.  John Brome (such was the spelling of the family name until 1750) came to Maryland from Herefordshire, England, and acquired large tracts of land in Calvert County.  A 2000-acre parcel, known as “Broome’s Manor” was granted him 1651.  His extensive tracks included land along the east side of the Patuxent River and along Island Creek.           At one time, the Island was known by another name. In 1807, William Tylor of Dorchester County, 100 acres of land on the Patuxent River in Calvert County, described in the land records as “near the mouth of Island Creek – Smith’s Island, or Great Island.” Tylor sold the same 100 acres to John Broome in 1814. Information about the early settlement of the community at Broome’s Island, but reckoning by members of the community dates its formation during the last half of the nineteenth century. Broome’s Islanders trace their families back to Virginia, Charles and Anne Arundel Counties, and in many cases, to the Eastern Shore of Maryland. 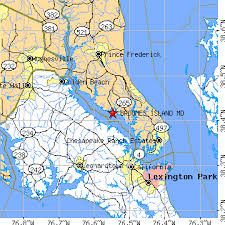 Today, Broome’s Island appears to be merely a small cluster of houses and a couple of store, a tiny post office, one church, and an oyster packing plant. From the main road (Broome’s Island Rd), glimpses of water are continually seen through the trees, and one is reminded that the water is never very far away. Island Creek, Nan’s Cove, and the Patuxent River border the community, although they do not make it an island. Only on a very high tide or amidst a heavy storm when the road floods just past Len’s Market, can Broome’s Island be said to be a true island.             Like most communities in Southern Maryland, Broome’s Island is unincorporated, and its precise boundaries are not clearly defined in a physical sense.  From the point of view of the U.S. Census Bureau, Broome’s Island covers an area of several miles and includes settlements which Calvert County natives know as Island Creek, Port Republic, and Mutual.  But lifelong residents of the community know exactly where Broome’s Island begins and ends, and from this point of view, is does not include those settlements.  Some residents even distinguish between “upper” and “lower” sides of the community.             Recognizing the insider’s map of the community is one step towards learning about a place.  But in the case of Broome’s Island, the community is as much a state of mind as it is a piece of geography.  That state of mind is grounded in the past that lifelong members of the community share. Broome’s Island’s past is inextricably linked with the water. More than any other community in Calvert County, except perhaps Solomons, Broome’s Islanders have relied on the water for a living. Of course, people worked to some degree in agriculture, and even today fields of tobacco and corn stretch all the way down the water’s edge. And during the depression and World War II, men from the community took jobs at Solomons or at the Patuxent Naval Base to get by. But by and large, the development of Broome’s Island as a community and the single force which brought people of the community together, was harvesting and processing crabs, fish, oysters, and clams from the Patuxent River.
share Share
arrow_backSchool is in session!
Return to Blog Index
Sculpturs, Art and more!arrow_forward

You message has been sent!

Send us a Message

Success! Please check your email for instructions on how to reset your password.

We will never sell your e-mail address or phone number under any circumstances.

Free and complete access to Saved Searches and more